The Monorail High Speed ​​Train: a modern means of transport adapted to the socio-economic growth of an Emerging Country in the heart of Africa.

The reception of investments in the Democratic Republic of Congo has become a great necessity at present in the face of the regionalization of the economy to meet the challenge of socioeconomic and environmental development. This need is defined by the creation and expansion of basic infrastructure and first of all the transport networks and communication routes likely to intensify the exchanges and movement of people and their goods in the 26 provinces covered by 5 corridors. output to the 10 neighboring countries.

Indeed, the Congolese networks appear undeniably as factors of development. To realize it, it is enough to travel the extent of the territories to discover there for example: the 145.000Km of the roads, then 16.238km along the river, lake and maritime ways. The railway covers 5,033 km while the air network encompasses 270 aerodromes including 5 international airports.

Unfortunately, these infrastructures have become dilapidated and despite the good intentions to improve them in order to intensify the traffic in hundreds of thousands of tons of goods and travelers from North to South and from East to West over an area of ​​more of 2.345 million km2 with 93.5 million inhabitants waiting to be served.

For reasons of modernity and improvement of conditions of rapid mobility, the DRC must use a mass transport system called -TGV- kind of Monorail, in the absence of metro in order to reduce transit time as well as transport costs. and increase the economy of scale covering the entire territory and the sub-region. In view of its comparative advantage in terms of favorable areas considered as a sub-continent, there is the possibility of succeeding in this very important project.

The ideal is to modernize 10,800Km of monorail on the first line between Banana and Aru, Via Kinshasa, Mbandaka and Kisangani, then the second between Kinshasa and Sakania via Mwene-Ditu, Kamina and Sakania. Monorail is a convenient and suitable system for long journeys and urban networks with an average speed of 250 to 350Km / h. The first phase will begin on a 485 km section on the line between Kinshasa and Banana via 16 stations with about thirty relay stations for a period of 4 years of works at a rate of 121.1 km per year.

The interim investment will amount to 1.66 billion dollars with an advantage in the supply of raw materials, steelworks, plumbing, reinforcement, sands, cement works, carpentry and others by Congolese manufacturing industries. This investment will create the “snowball” effect for the employment of more than 6,200 direct jobs and 6.2 million indirect jobs in the various sectors linked to the transport sector and communication routes.

Thus, the economy of this project is structured in three parts as follows:

I.1. Signage of the Congo Speed ​​Ways Consortium

I.5.2 Comparative advantages of the monorail

I.5.3 Profitability of the Congo Speed ​​Ways line

II.2.2 Financial costs of the loan

II.3 Transport markets and communication routes in the DRC 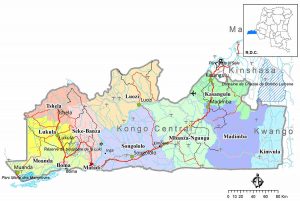 Kongo- Central, called Bas-Congo before 2015, is a province of the Democratic Republic of Congo. The westernmost extension of the country, it is the only road whose structure is as follows:

The Kongo-Central province stretches from the Atlantic Ocean to the capital and the former province of Bandundu, thus covering an area of ​​55,000 km2, almost twice the size of Belgium. The Congo River flows all along the province dividing it in two. It is part of the basin of this river, with the exception of the Northwest, North Mayumbe drained by the Shiloango. Geographically, it has for limits:

The relief of the province is oriented parallel to the coast to north-west / south-east in the center. Belonging to the Monts de Cristal chain, there is the Pallabala massif, Mont Lamata, the Bangu plateau, and on the right bank the Mayombe massif. This relief is crossed by the Congo River in a series of waterfalls and rapids among the most powerful and long in the world. Besides the capital of Matadi province, the main cities and towns of the province are Boma, Moanda, Banana, Mbanza-Ngungu (formerly Thysville) and Vivi. The province is made up of 2 cities and 10 territories, divided into 6 urban communes, 17 rural communes, 55 sectors and 376 groupings. 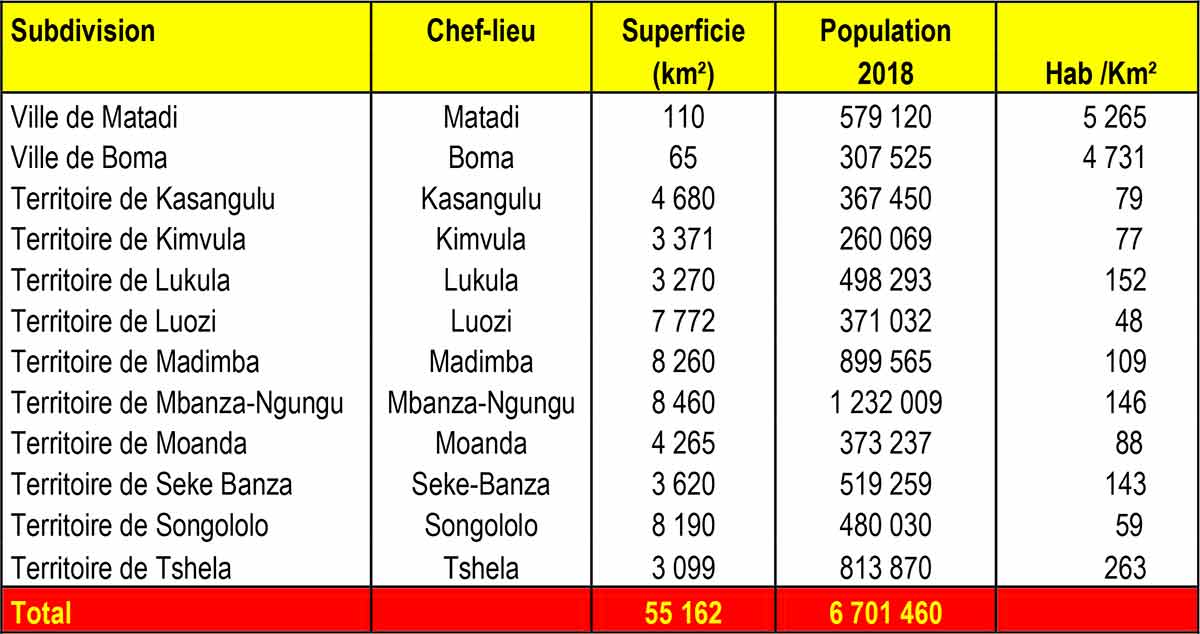 The province is among the most active in the Democratic Republic of Congo with a highly developed economy: agricultural products, mining productions, petroleum, industrial productions and others; all this thanks to its geographical location (the maritime coast), its forest wealth, its arable soil, its railway connecting the city of Kinshasa (the capital) to the port city of Matadi, the Matadi bridge (former Maréchal-Mobutu bridge ) connecting the port city of Boma to that of Matadi and also giving access to the beach of Moanda, the hydroelectric dams, especially the three dams of Inga.

For these last reasons and so many others essentially geographical and historical, it is one of the most touristic provinces of Congo-Kinshasa. Its economic specificity is due to a considerable diversity:

II.5.1 Evolution of freight traffic by land, air and river 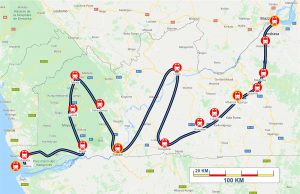 II.6.5 Comparison of monorail traffic capacity with other tracks.

II.7.1 Board of Directors

This committee is technically the assistance of the pilot committee which works under the impetus or directive of each direction. These are the following human resources: